My weekend in Chicago 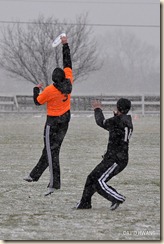 Yeah.  Kind of cold.  I’ve never seen so many people playing in gloves: 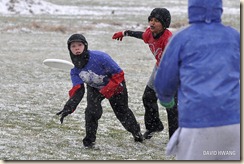 After a few hours of the torrential snow, the weather started to clear a little. 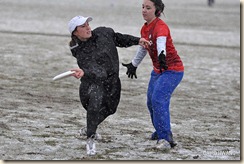 The snow started to melt, but the wind kept blowing.  Less snow actually made matters worse.  The ground started to thaw: 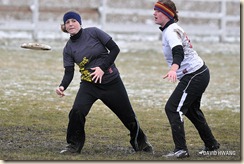 You can see the mud and the dirty disc.  Conditions continued to worsen and all the fields started to look like this: 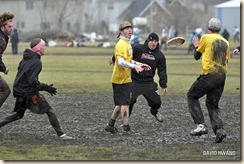 The other interesting part was the parking lot.  There were around 120 teams that showed up to play in this wonderful weather.  A polo field is really the only thing big enough for the amount of field space needed.  Parking happens in the paddock next to the fields.  If people were able to chew up the thawed ground as much as you can see in these photos, imagine what a bunch of cars can do.  It was a muddy mess.

Day 2 of this tournament was actually cancelled even though the weather was slightly better.  It was still cold and windy without precipitation.  However the mud, especially in the parking paddock made it impossible.

Did I mention wind?  20 mph or so.  We had one game where every point was scored in the downwind end zone

Thanks to David Hwang for the photos.  Click on any image to get to his flickr page and see the rest of the photos from the weekend.  I took my camera, but was too frozen to take it out.

I finished out the weekend with the Shamrock Shuffle in downtown Chicago.  It is an 8k (5 miles) race with 36000 entrants.  I finished with a decent time for 43:03.

They went 3-1. The only loss was on a flip. The other team won and chose downwind to start which was the difference since we traded points downwind. It was a pretty good weekend. They were seeded around 50 out of 64 and probably would have beat seed.