Here's another photo from my year-long project. This might be my new favorite. You don't see contrast like this with your own eyes, but it definitely gives this photo a gritty feel. I noticed that the street lights were on in the alley even though it was day time. They definitely add to the feel. We had big snow flakes falling today. I decided to take some pictures with my pringles lens. 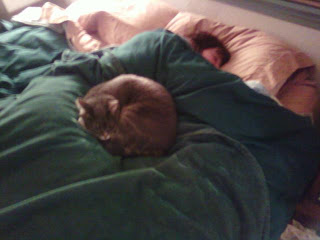 Kathy went to bed a little earlier than me last night. When I came up, these two cuties were curled up together. =)
Posted by cgm at 2:26 PM 1 comment: 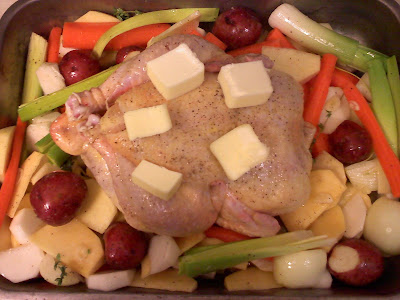 Here's a picture of the first whole chicken I ever roasted.  It's obviously a "before" picture, and unfortunately I forgot to take a "when it's done" picture.  Craig and Kristi both said it tasted good.  The veggies were carrots, rutebegas, turnips, red potatoes, an onion, and leeks.  I used this recipe, and would recommend it whole-heartedly.
Also, the chicken cost less than it weighed.  Yes, they were different units of measurement, but still... The chicken weighed four pounds and cost less than $4.  Next time I think I'll splurge and get a happy chicken if I can find one.  Plus, we can make stock this weekend out of the bones!
Posted by Kathy Glick Miller at 6:23 PM No comments:

About a week and a half ago Goshen had an ice sculpture contest downtown.  Since the weather's been so cold here (grrrrrrrr!) the sculptures are still in excellent shape.  Craig and I stopped and both took some pictures with our respective phones on the way home from work today.
Here are some of mine: 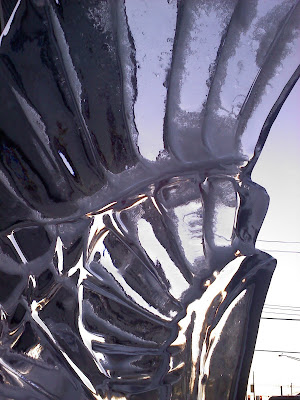 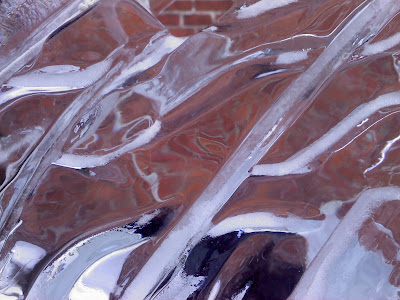 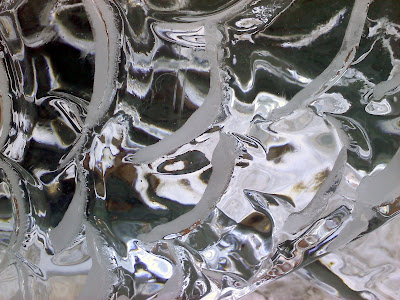 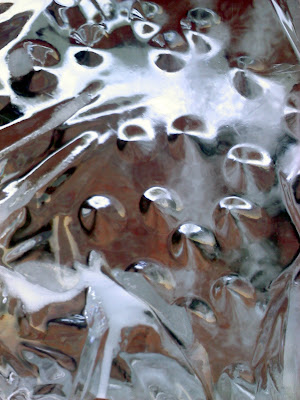 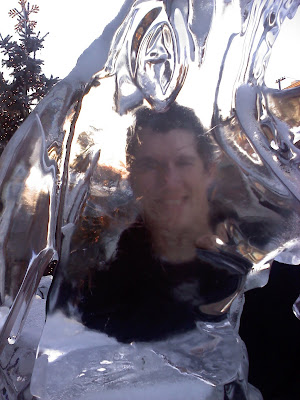 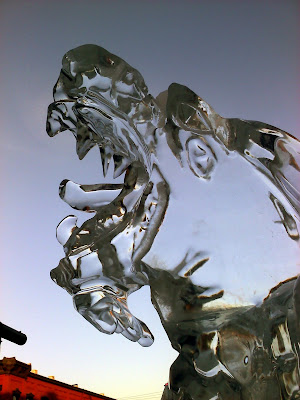 Posted by Kathy Glick Miller at 6:17 PM No comments:

I was digging through some old photos before heading to bed tonight.  Somewhere buried on my hard drive were a bunch of images from the classes I took out in Colorado.  There are quite a few interesting projects, but by far my favorite were some ads I did for a design class.

The goat is probably my favorite.  And Kathy got some bouquets out of the flower project.

That’s right!  Around the turn of the century I was using selective color.  Did I start a trend?  That only blossomed 10 years later?  Probably not. 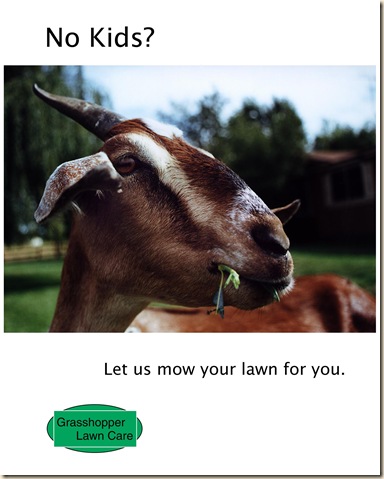 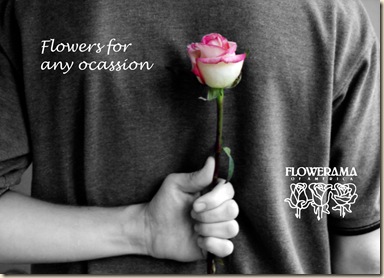 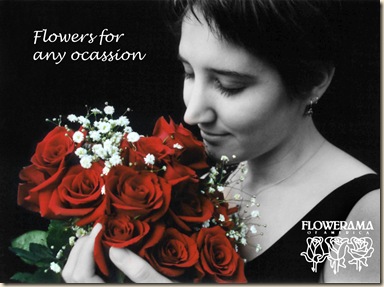 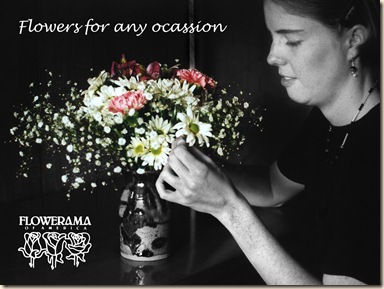 Another year has started. This one will be very different for us. Not only are we going to have a baby in July, but also I decided to do a photography project. I will be taking a photo a day. Mostly I’ll be using my camera phone since it is always with me, but I’ll also be using my DSLR to add to the mix.

It’s already been challenging and rewarding! You can follow along and see what I’ve done here: http://www.flickr.com/photos/glickmiller/sets/72157622889094817/

There is an RSS feed for those of you who use readers. If you don’t, save that link as a favorite and keep checking back! If you don’t see any recent photos feel free to call and yell at me.

As a teaser, here is today’s photo: 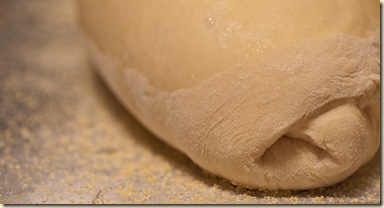 Ken Rockwell reviews a ton of photography equipment.  He seems to know what he’s talking about so I have been following his site for the last month or so.  However, yesterday he had a post that drove me crazy, above and beyond his usual idiosyncrasies.   It was only topped when I went to find a link to it.  Turns out that he doesn’t do the daily updates as individual posts, but rather updates the same page every day.  So here is the link to the article in question Ken Rockwell's Updates.  But you’ll have to scroll down to January 6.  It also looks like the link will break at the end of the month.  Okay, annoying.

Back to the impetus of this post.  In his update on January 6th, he asks us to “try to forget how many tens of thousands of dollar each of us threw at DLSRs last decade, and how little we have to show for it today.”  Digital rot, which as far as I can tell is a term he made up, is when digital technology rapidly ages and loses it value.  After about two years, your DSLR is out of date and due for an update.

Part of his argument is that before DSLRs, a camera was basically a dark box used to expose film.  Some cameras had more bells and whistles but they all served the purpose.  With DSLRs the “film” is built into the camera—the sensors.  Improved film?  Buy a roll and use it.  Improved sensors? Buy a new camera.  “Camera companies love digital, because digital cameras are thrown away and replaced every two to three years.”

I remember buying my first SLR—a Nikon N70—in 1998.  That same year the F100 came out and a year or two later the N80 came out.  I was so fascinated with the F100, and the N80 was much much closer to the F100 so I upgraded when I could.  It may not have been the sensor since it was a film camera, but there were other things that I wanted like 3d-matrix metering, better autofocus, 3 fps, etc.  So it wasn’t digital rot like he talks about, but there was feature rot.

Rockwell’s main beef seems to be the need to replace camera bodies every two to three years.  The resale value of these DSLRs falls pretty quickly.  I’ll only mention that the N70 I bought lost half of its retail value (not talking resale value here) within a year of my purchase.  I’ll also admit that I’m confused why he needs to replace his camera that often.  Maybe we are looking at this from different perspectives.  This past year I bought my first DSLR.  I didn’t even bother looking at new ones since they were well outside of my price range.  I found a used D200 (released 2005) for a very reasonable price.  I’ve been using it for about a year now and absolutely love it.  It may have issues and newer cameras may have better cooler features, but the D200 does everything I want (and more!).  Unless things change a lot in the next year or two, I will continue to use this body and I even bought it used.  Maybe I’m missing something about his argument, but it seems to me you don’t have to buy into new often.

The reason he doesn’t like having to replace is because of the cost and the drop off in resale value.  “[His] F4 cost me only a couple of hundred bucks in its box a couple of years ago, and it's still worth at least what [he] paid for it.”  He doesn’t even consider the cost of film, developing, etc.  I haven’t spent any money on consumables since I bought my DSLR.

The kicker though, and the paragraph that really set me off:

This was frame 39 on a 36-exposure roll of film. Digital does't even go to frame 39 or even the 37th frame; when you fill your card or your buffer, you're bonked. Worse, with digital, you pay for a 4GB card, but it only holds 3.8GB. What's up with that?

He tagged this on at the end of the article and really should have left it off.  Is he really complaining because a 4GB flash card which holds a couple hundred images does not hold a couple hundred plus 3?  A 4 GB CF card holds more than 5 times as many photos as that “36” roll of film, even with those few extra frames.

At this point I have a love/hate attitude toward his blog.  He reviews a ton of equipment and does a pretty decent job.  He has some good how-to articles.  But then he is always begging readers to support him, and the blog layout is horrible, and he occasionally lays an egg like the one that prompted this post.  For now, I’ll keep checking on his blog, but he’s on probation