Well, I just got new skates. The skates that I bought in early August already broke. At least, one of the rivets that holds the shoelaces popped loose. They didn't have my size so I ended up getting a different pair. They are K2 skates that are much more comfortable.

Today is Friday. I'm heading up to LaGrange for a call this morning and then back home to wrap up paperwork for the week (and clean up last week's while I'm at it). Then it's a nice long weekend to get some things done around the house!
Posted by cgm at 8:00 AM No comments:

My brother reprimanded me for not posting recently. Having not checked in a few weeks, he expecteded there to be at least one post. But there were none... So I'm sitting on the couch with Kathy, watching pre-season football, and writing an entry on my phone.

We are getting towards the end of our Ultimate season. We have an off weekend and then tournaments the next two. That should be it then. It's been fun, but i'm looking forward to some extra free time.

I'll have more time for skating. I borrowed my cousin's roller blades which she left at our house while she was out of the country. I enjoyed it quite a lot so I decided to buy my own, especially since hers were old and not very comfortable. Since the are low impact (read knee friendly) I try to get out most days. So far I just being going forward and learning how to stop. I don't have pads yet and don't feel like injuring myself at this time

Well, I think it's about time for bed. Plus it's not the easiest thing to type on this phone, even with a qwerty keyboard. 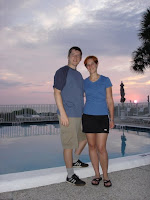 This summer seems to be evaporating. Every time I turn around more of it is gone...

Craig and I are keeping very busy. We rarely have more than a day or two a week when we don't have something scheduled. For some people that may be more than enough down time, but the two of us like our leisure time.

The first couple of pictures here are from our week in Florida, where we did alm 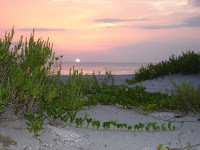 We've been back for a month, now, though it doesn't really seem that long. We play in two ultimate frisbee leagues, one in South Bend about 50 minutes away, and one in K

alamazoo, MI, about 90 minutes away. We did have costume/dress up night at both leagues a couple of weeks ago, which is always a lot of fun.

Craig and I went as superheroes. We don't currently have very good pictures, but some should hopefully be coming before too long. Craig is the guy in the red cape in the picture to the right, and I'm in the blue cape in the picture below. Playing in a cape wasn't as distracting as I though it would be, although Craig did have some problems with his arm getting caught in the cape on some of his longer throws.

We also have either one or two day tournaments scheduled for 5 out of the next 7 weekends, which will continue to keep us very busy. But we both enjoy playing, it's great exercise, we meet new peo

My sister Kristi is staying with us for the next few days, which we're really happy about. We haven't seen nearly enough of her the last three years, since she was living in North Carolina. She graduated this spring with a Master of Fine Arts. She is an incredible artist, with amazing craftsmanship to go with her beautiful aesthetic sense. She specializes in metalworking which incorporates objects from nature.

On a different note, we went to see the Simpsons movie last weekend, are going to see the third Bourne movie tomorrow, and I'm planning on watching Stardust next weekend (providing our local theater is showing it. I might have to go to South Bend where there are larger cinemas). I just finished reading the last 4 Series of Unfortunate Events books, the newest Jasper Fforde book, First Among Sequels (featuring Thursday Next), and am starting to read the 7 Harry Potter books straight through. And on another media front, Craig and I have been watching Scrubs and The Office, both of which we really enjoy.

We've had really big wasps flying around our house the last month or so - and by really big I mean 2, 2.5 inches long (which might not seem that bad until you look at a ruler and then picture a what looks like a hornet that size flying right at you). Craig did a little research and found out that they are Cicada Killer Wasps. The males don't actually have stingers but like to check out anything that moves, which seems a lot like attacking. The females do have stingers but aren't at all aggressive towards humans (unless they get stepped on or so on). So, while it is good to know that it's highly unlikely we'll get stung, it's still freaky to have monster-sized wasps hanging out by our flowers and in our yard.

We're looking forward to a mini Glick reunion next week. It's nice to see family, and very nice to have it just a few blocks away from us instead of in Ohio or other more distant locations.

While this doesn't cover a month's worth of missed blog entries, at least it's something. =)

Today's random quote:
My evil genius Procrastination has whispered me to tarry 'til a more convenient season.
Mary Todd Lincoln (1818 - 1882)