I had a new experience this morning. As any of you cat owners know, occasionally they make a lot of noise--scrabbling on the floor, batting objects around, knocking things off of desks. You get used to it. When I am in bed sleeping, I usually don't even notice them, except when they pounce on my toes.

This morning was different. Olivia was making a loud popping sound in our bedroom. We threw something at her, whatever happened to be laying by the bed. She ran away, but several minutes later she was back at it. We threw something a little bigger hoping to distract her and make her stop. Again, she ran away and then came back. Pop! Pop!

We were both curious what she was doing to make that noise, and we knew that she was going to persist unless we did something about it. So we turned on the lights and Kathy went to have a look. "It's a rubber band!"

What? Turns out that there was a little box with a rubber band around it to hold it shut. Olivia had her paw on the box and was grabbing the rubber band with her teeth, pulling, and then letting it snap. I've seen her do this with cardboard before, but never with anything like a rubber band. I hope this isn't a trick that she will continue doing. I guess we don't have a lot of rubber-banded boxes lying around...
Posted by cgm at 10:29 AM No comments: 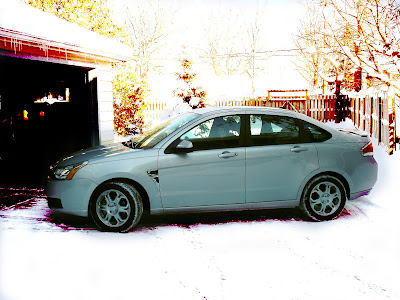 Finally have a better photo of our new car. We've named her MonkeyPeaches. Kathy's the smiling face inside the glare.
Posted by cgm at 7:49 PM No comments: 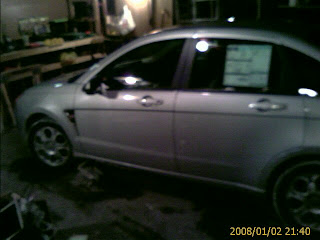 This isn't the best picture in the world--I just snapped it last night in the garage. So I included an image from Ford's website, too. We bought a new Ford Focus yesterday.

We're excited about it. I need to go eat some breakfast so I'll write more later...
Posted by cgm at 7:24 AM 2 comments: