I'm sitting in MonkeyPeaches--that's what we named our new car--while Kathy finishes up her day. I just back in to Goshen after two calls in Mishawaka and Elkhart. It was close enough to 5 that I decided to just wait in the parking lot.

Now that I decided to write into the blog, she'll probably come right out.

I drove up to Mishawaka only to find out that I need to go back. I was going to update their antivirus, but found out that I needed to install an additional piece on the server. We could not find the Windows server CDs anywhere. I thought I might have one in my trunk, but no luck. So I get to go back up later this week, after I make a copy of the CD for them.

Just for the record we inherited this client, this server. We can easily blame it on the previous tech.

Well, it's time to go now. See you all later! 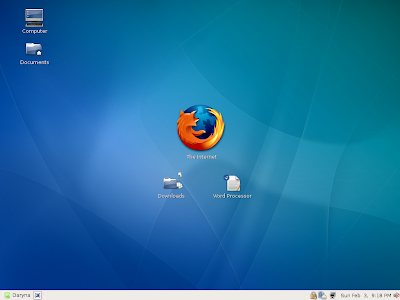 Here is the way someone set up their mom's computer. I like it. Get rid of the clutter and make the important things obvious, e.g. big and center.
Posted by cgm at 8:37 AM No comments:

I recently added Slate.com to my Google Reader. They published an interesting article the other day about the US military budget. It's quite amazing how much we spend, but it is also interesting to note that it is 4% of GDP, and the smaller number they mention "is roughly equal to the total military budgets of all the rest of the world's nations combined."

Slate helps out with Day to Day, which is one of my favorite NPR programs.
Posted by cgm at 8:31 AM No comments:

Once again I got to shovel the drive. Of course it was made worse by the fact that I broke my shovel. The screws fell out last time I used it so I had put in new screws. They already stripped out so I decided it was time for a new shovel. We do have a second shovel, but it is a straight one instead of the ergonomic bendy shovel. Made the work much harder on my back and arms. I managed to clear it all off although I did it in three different shifts.

Now I'm sitting in the recliner watching a movie with a heating pad on my back. It's nice and comfy.
Posted by cgm at 6:28 PM No comments: