I recently noticed this interesting graph from my gas company.  We are on a budget plan and managed to undershoot, which means we don't have to pay anything this month.  Or more precisely, we paid enough throughout the year to cover this month.

The anomalous estimated March might have something to do with the overage on the budget.  I'll give them January and February--they were very cold (mean average temperature of 25 and 24, respectively).  How do they figure that we used more therms in March, with an mean average temperature of 34, than we did in January and February?  Clearly things are warming up on average in March.  Maybe all of the up and down temperatures of the month (see graph of March 2008 below) made for more inefficient heating...

Hopefully they will actually take a measurement and get rid of the estimate status for March.  Do they go back in time for that?  Maybe it's just that the printer ran out of ink for that little bar...

Well, it's a rainy day outside, but since I'm inside at work on my lunch break, I can't complain too much.

As promised, here are the books I've read since my last book review post.

1. Neil Gaiman's neverwhere Mike Carey, writer; Glenn Fabry, artist; Tanya & Richard Horie, colorists; Todd Klein, letterer. This is a graphic novel based on, you guessed it, Neil Gaimon's neverwhere. I haven't read the book, so I can't do any comparisons. This graphic novel was significantly longer than the two I wrote about last time, which meant that there was more character development, as well as more plot, which was nice. I didn't like the graphics nearly as much, though. And the subject matter was a little bleak. Also, there was another "little psychotic bad man who's always with a huge psychotic bad man doing bad things" couple. Tad William's Otherworld series had a pair, and so did Terry Pratchett's The Truth. Weird.

2. Donnerjack by Roger Zelazny. I read this book because my cousin Kelcie saw the quote "Ginger Rogers did everything Fred Astair did, only backwards and in high heels" and figured out where she'd come across it before - in Donnerjack. I liked this book quite a lot. The only other Zelazny that I've read is his Amber Chronicles - I have a book with all ten volumes, and I've read it a couple times, and like it, too. This seemed more fleshed out than any of the Amber books (not too surprising since it was one of his later books and the Amber ones are older). The story takes place in the future, where there are two realities: Virtu and Verite, the virtual universe and the "real" flesh and blood one. And it turns out they're not as separate as people think they are. It's a nice heavy book - not that it's tedious or slow to read, just that it's full of characters and ideas and places. 3. Postsinglular by Rudy Rucker. I got this book out of the library because it had an interesting cover and a cover blurb which proclaimed, "Rudy Rucker should be declared a National Treasure of American Science Fiction." So, I gave it a try. Overall, I wasn't too impressed. The main thing that bothered me was that I found the dialog extremely stilted. It was a interesting story, with lots of "what tech stuff could happen in the future," but I didn't find the characters that engaging (probably because of the aforementioned dialog issue).

4. Halting State by Charles Stross. I discovered Charles Stross about a year ago, and have been enjoying his stuff ever since. He also writes about future worlds, though this book is not as far ahead in the imaginary future as some of his others (Accelerando, Singularity Sky, Glasshouse). A bank theft by a horde of orcs and a firebreathing dragon in a virtual world starts the story off, and it goes on from there. Here's a quote from From Bookmarks Magazine:

Reviewers expressed shock and awe at Charles Stross’s imagined future, because it’s just a bit too probable. Even his minor details, such as clothing with RFID tags that can speak to washing machines, are mind-bending. Overall, Halting State is a fast-paced, tightly plotted, and highly intelligent novel. While some of it may read as gibberish to a less in-the-know crowd (it’s helpful to know such gamer slang as "nerfed"), the tech-savvy will rejoice. One reviewer thought the plot became convoluted at the end with a too-neat resolution. But others, like Cory Doctorow in BoingBoing, commented, "This is a book that will change the way you see the way the world works."
Copyright © 2004 Phillips & Nelson Media, Inc.


The book follows three main characters (a forensic accountant, a programmer, and a cop). The one thing that threw me off a little was the fact that it's written in the second person, a very unusual choice and one that took me a while to slip into.
This is the second time I've read Halting State and I enjoyed it even more the second time. There were a lot of details I didn't catch the first time through that I could appreciate this time.

Well, turns out that the last 3 books I've read were all books that take place in a future where technology has irrevocably changed not only the way we do things, but also the way we think. And I didn't even plan it that way. I'll try to pick something in a different vein for my next book.

How to Create Invisible Shelves - wikiHow

These are pretty cool.  I might make this a project some afternoon.  Then I can test visitors on whether they read our blog.  Well, I guess you have to click through, too.  Do it!

In re: the last paragraph of Craig's last post

Here's the link for you if you're wondering when you will receive your IRS Stimulus Payment. This is for people who filed their returns by April 15th. If you filed an extension, your payment won't come until your return is filed and processed. (You'll need to know the last 2 digits of the Social Security Number of the person whose name is listed first on your return.)
Posted by Kathy Glick Miller at 2:38 PM No comments:

In case you missed it, today is Tuesday in Indiana. We're voting in the primary--and it matters! Kathy found this fascinating map (http://snipurl.com/gmapprimary) showing results around the country, down to counties. It doesn't have anything for Indiana yet, but it probably will by the time you read this. Kathy and I did our civic duty and went to the polls before lunch today.


I'm actually in her office today, installing a new server. It's neat to have her a room away instead of across town. We still use IM though, but only to share links like the primary map.
Posted by cgm at 2:31 PM No comments:

First weekend in May

Well, this past weekend Craig and I saw Iron Man, which we enjoyed. We also spend some time with Matt Martin and Charlotta Weaver, two old friends with whom we always have fun. (Ok, quick side note - I started out saying "two old friends that we always appreciate spending time with." Then I decided I needed to change "that" to "who," but then "Who" needed to be "whom" because of the "with," which then sounded awkward. And then "appreciate spending time" just seemed sounded weird to me, so I changed it. And that's why it sometimes takes me longer to write things than I think it should.)

Sunday I wasn't feeling very good, so I basically sat in the recliner all day. I did get quite a bit of reading done, namely The Grand Tour : Being a Revelation of Matters of High Confidentiality and Greatest Importance, Including Extracts from the Intimate Diary of a Noblewoman and the Sworn Testimony of a Lady of Quality and The Missing Magician or Ten Years After by Patricia C. Wrede and Caroline Stevermer. (I had read Sorcery and Cecelia or The Enchanted Chocolate Pot: Being the Correspondence of Two Young Ladies of Quality Regarding Various Magical Scandals in London and the Country, the first book in the series, earlier in the week.
All three books are ones I enjoy reading, but I have to admit that I like some of the works they've done separately better, mostly because I don't find the style of writing (the first and third books consist of correspondence, the middle one mostly of journal entries) to be especially engaging. I feel it has some inherent limitations that are extremely hard to overcome. All the same, these are fun books that I wouldn't hesitate to recommend to others.
Oh, and it seems like every flowering tree in Goshen is in full bloom. It's really lovely. I wish this time of year lasted longer.
Posted by Kathy Glick Miller at 2:10 PM 1 comment:

I thought it might be interesting to try to post books that I'm reading. Yesterday we went to the library and I got a few graphic novels, so I can start the list with: 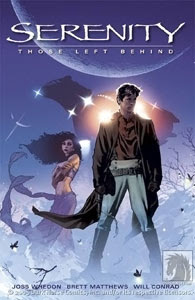 I enjoyed the graphic novels. The art in the first two was very good. The stories were quite compressed, though, which was a little disappointing (because I wanted more).

I'm also in the middle of Wheel of the Infinite by Martha Wells. Martha Wells is one of my very favorite authors. I've added Stargate: Atlantis to my Netflix queue solely because she has started writing S:A novels, which I can't really appreciate as much because I've never seen the show. I read her other novels probably about once a year.

I don't have much time; I have to leave to get to a call at 3...  I just found this article on ESPN and was very touched.  Tucholsky blows out her knee on her only career home run which happens during her last game.  I'll let you read all the details, but due to technicalities her teammates and coaches couldn't help her round the bases without resulting in an out.  So two of her opponents--Wallace and Holtman--offered to carry her around the bases.  That is moving outside the game and respecting your opponents as people.  The article is well written, but the event is even better.  Give it a read!

Kathy and I are trying to decide what movie to go see this weekend.  We have been waiting for some free time to go and see Forbidden Kingdom (Metacritic), where Jet Li and Jackie Chan team up for a fun romp.  But this weekend is the opening weekend for Ironman (Metacritic).  We might end up going to both movies.

What does the summer hold for you?  Some would like to think that the summer blockbuster is dying.  Once again a post from Kottke enlightens, although it doesn't have much information in and of itself, but some interesting article links.

We are also looking forward to having a college friend visit us this weekend.  We'll have to see whether he wants to see a movie after supper on Saturday.