I suppose this title is not technically accurate.  The side door on our house was unlocked so they didn’t actually break anything.

Maybe I should start from the beginning…

No, that is too far back.  I’ll start with me moving my office to the basement to make way for a nursery upstairs.  I had been working at home in the basement most of the morning, and decided to ride my bike for some exercise to start off lunch.  With the computer down there, I can now watch TV shows using Netflix online viewing.

At some point I thought I heard the doorbell, but it is not all that uncommon for UPS or USPS to deliver a package and ring the doorbell as they walk away.  I figured I would check the front door later.  Not that I really thought that.  Instead I was thinking that entering a code and pushing a button every 108 minutes would be mind numbing, and trying not to think about my burning muscles.

I was actually just finishing  the workout and moved to the computer to check my email before heading upstairs to shower.  While I was looking at my email, I heard footsteps upstairs.  At first I figured it was the friend I was meeting for lunch, and finished checking my email.  Then I heard footsteps come down from the top floor.

“Oh, he must not know I moved my office to the basement,” I thought.  So I headed to the stairs.  As soon as my foot hit the bottom stair, I heard scrambling upstairs.

“Oh, I bet he’s going to try to hide and surprise me,” I thought.  Even when I got to the top of the stairs and saw a back flying out the door, my mind was still saying it was my friend.

But then it dawned on me that there were two.  And they were moving way faster than my friend ever could (Sorry, K—it’s true.  They were two kids and scared out of their minds).

If you have ever had a situation were the body instantly pumps an overload of adrenaline into your veins, you’ll know how I felt.  Instant edginess, disbelief, shaking, and playing out a million different scenarios in your head.

I called Kathy to let her know I was alright even though she had no idea that anything had happened.  Then I got the number for the cops.  They came over—three cars, I think.  I talked to one of them for awhile, explaining what had happened, while the others looked for the suspects.

One cop came back in with $1.60 (3 half dollars and a dime) that they dropped in the alley while running away.

Turns out that they started a few houses down from mine.  It was locked.  At the next house, the lady actually talked to them.  They were looking for their friend, but must have the wrong house.  They eventually made it to my house and came in.

These stupid high school kids almost made off with my PS3. 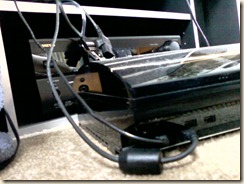 You can see the cables on the back are draped across the shelf it sits on.  The only cables left were the two USBs plugged into the front for charging the controllers.  Another minute and they would have been gone.

While one was working on the PS3, the other went upstairs to look for any cash or jewelry.  I guess all he found was the half dollars.  And his footsteps on the stairs are what brought my up from the basement.

I bet they were as surprised as I was.  But it is MY house.  So don’t come back!

Update:  A detective called to say that the two kids were apprehended.  And the cops were retrieving my phone off of the roof.  Wait, what?  I have my phone…  Oh!  I went upstairs and, sure enough, my old phone that I replaced a year ago but hadn’t recycled yet.  They got a statement out of the one kid and the other’s mom wouldn’t let him talk without an attorney.

At least you didn't confront them like I did when I walked in on someone in my house a few years ago. ;)
- Jessica

Geeze! I'm glad you're okay, albeit shaken. I do think it's funny that you called Kathy before the police. :) She is pretty kick ass!

Now you may be forced to do some legal proceedings to prosecute these minors. Sounds like a headache. I bet they'll never come back though -- daylight hours are when most people are gone... Except CGM and his mighty burning muscles.