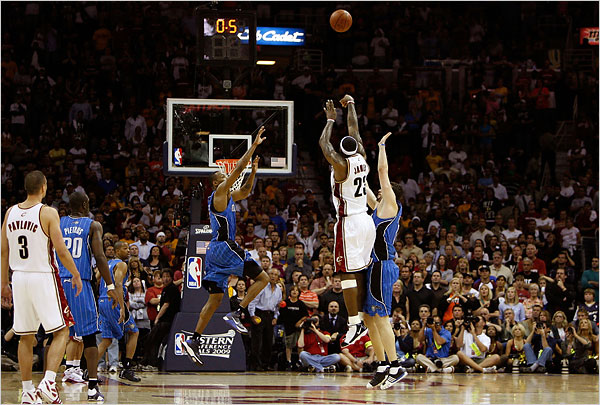 Kathy and I were watching the Cavs last night.  After blowing another big lead and going down 2 with only one second left, I received this text from my friend:

Pssh. One second left on my tv!

I had been pausing and rewinding so I jokingly wrote this, figuring he had already seen the end of the game.  But apparently not.

No sooner than I sent that text, I watched Lebron make the game winning three from the top of the arc.  I was even more surprised than most because as I said I thought my friend had already seen the end of the game.

I called my friend to rub it in and found out that he had switched over to check in on the Cubs game.  He turned back to the Cavs to see everyone jumping around.  He missed it for the Cubs.  Take that!

Kathy kept rewinding and rewatching.  Lebron is calling it "the biggest shot I’ve made in my career."  Instant classic.  Apparently people in Cleveland want to call it "the shot" to try to forget Michael Jordan defeating the Cavs with the shot over Craig Ehlo.

I'm just glad I got to watch it.